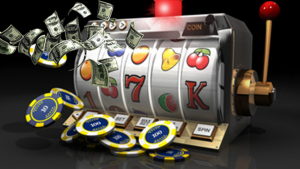 For most slot players, the lure of winning the jackpot is what gets them to play the games on offer. Some games have a fixed jackpot total that you can try to win, while other games which are specifically based around their jackpot have what is known as a progressive jackpot. The basic reason why is because this is a jackpot that gets progressively bigger, but for those who have never played before, how do these games actually work?

Progressive jackpot games are known to have the biggest pay outs available on casino games, which is why they are so appealing to players. With just one single spin of the reels you could find yourself on the receiving end of a life-changing sum of money thanks to one of the many progressive jackpot games that are out there for you to play.

The jackpot will rise and the winner will come completely at random on the games, the more people that play, the quicker the jackpot will rise. The majority of online casinos will offer a number of these progressive jackpot games for you to play, and you will be able to see the current prize total before you join in the game if you wish.

The Basics of Progressive Jackpot Games

When you play a progressive jackpot game, you are often playing a game that many more people are at the same time. Many casinos offer these games as they are very popular, so it is players across many different casino sites that are taking part and in with a chance of winning. The good news for players is that with more players taking part across the different platforms, the jackpot prizes on offer will increase at a faster rate, so the big prizes will come thick and fast for you.

The reason that these games are known as ‘progressive jackpot’ games is because the jackpot keeps building until someone wins it. This can be something that grows for weeks and months before it is eventually won, and of course the longer it takes to drop, the more people play and the bigger the prize goes.

As an addition to the main progressive jackpot games that are on offer, we are now seeing more and more daily and hourly jackpot games produced. These games work in the same way but instead of going on until the game is randomly won, it is limited to being won once every day or once every hour in the hourly games.

These are great for those who want to sit down and play a game while feeling that they have a genuine chance of winning while they are playing. A regular progressive jackpot game could be won months after you play depending on the game while an hourly jackpot game offers a win every single hour of the day, so could be won while you are playing either by you or another player.

Check out all the UKs best Casino Sites before you register an account today.